You are here: Home / Blog / Uncategorized / Detox was going great, but then I was attacked by hot dogs!

Does that sound familiar? The day after the 4th of July weekend I received several emails from my clients, letting me know they fell off the wagon. These weren’t just matter-of-fact statements, but they were charged with guilty feelings and self-defeat: “It was going so great, but then someone brought apple pie and before I knew it, I had eaten a slice.” Or, “I was so hungry and then only thing that was there to eat were sandwiches, so I had bread. Now, i’m starting all over again.” Or, “I had to stay late at work to finish this stressful project and I got so hungry and cranky that I caved in on the M&Ms since that’s the only thing I had at work.”

These were emails from women. Not a single guilt trip from a guy. We women are experts at becoming bad people because we had ONE single french fry. Yes, you did sign up for the 21-Day Detox and committed to eating only lean proteins and veggies and drinking two NutriBullet shakes a day. BUT, you didn’t enroll in prison. Nor did you sign up to become the Saint of Kale. Life happens and there will always be triggers that tempt you. It’s all about how you handle the triggers. If you cave in and eat something you were supposed to eliminate (in other words, if you become possessed by the Chocolate Demons), it doesn’t mean that the Detox game is over and you should then reach for the box of pralines and then order a BigMac. It simply means you had something you hadn’t planned on and you move on to your next clean meal. It’s not like you played dodgeball, got hit and have to leave the court now. Life goes on.

Yesterday I checked in with my detoxers and several had a challenging weekend. Here’s just one email that I received:

“Well, the Detox WAS going great.  During the first 5 days, I was a rock star!  I eliminated all carbs, sugar, alcohol, grains, dairy, fruit and red meat.  I was eating only fresh vegetables, Nutribullet shakes and lean protein – mostly chicken, turkey burgers, tuna and tilapia.  I drank about 64 ounces of water a day, reduced my coffee intake to one cup in the morning and started to walk to work (which is 4 miles from where I live).  I felt very fatigued at first.  In fact, after the second day, I was in bed by 8:00PM.  However, by Wednesday of the first week, my sleeping pattern changed.  I tossed and turned less frequently and felt refreshed when I woke up in the morning.  Aside from a more restful sleep, my skin looked and felt better – especially around my eyes, believe it or not.  I wasn’t so frustrated with the restrictions and began to feel encouraged.  On that first Friday, I felt energized enough to pop in my Brooklyn Bridge Bootcamp DVD and got in a good, hard workout.

However, soon after I started, a few personal issues arose that derailed my progress.  I had a tough couple of days and, unfortunately, my diet went to pot.  Not literally, of course!  I just lost my incentive to stay on track.  I went out to dinner with a friend one night and that was it – I had bread, pasta, cake and coffee (yikes!) and from there, it was all downhill.  That was last week.  Today, I am starting over again from Day 1.

I had two hard-boiled eggs for breakfast, seasoned with dill and pepper, along with a Nutribullet shake consisting of fresh spinach, a cucumber, carrots and 1 Tbsp of apple-cider vinegar.

For lunch, I have a grilled chicken breast with fresh basil and sliced tomato with a small garden salad.  Dinner will be a salmon burger with oven-roasted cauliflower and broccoli.  In fact, just before I saw your email, I was writing out my grocery list and meal plans for the week.

I want to adhere to my fitness goals this time.  I’m a bit disappointed with myself but I started out so strong on the 22nd, that I know I can do it.   I reached out to my team-mate, and we’ve exchanged a few emails.  It always helps to have support.  I printed out all the emails you’ve been sending us from Day 1 of the Detox and put them in a binder so I can go back and read through them for motivation and tips.

Thanks for checking in with me!  I’m going to send you an email by Friday to let you know how I’m doing with my ‘reboot’.” 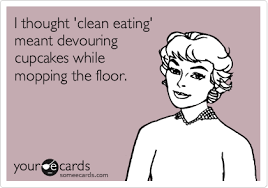 “D, there is no need to ‘start over’. This isn’t an on-or-off kind of challenge. Do you quit a relationship after you have just one argument? Do you quit your job after you made a little mistake? Or, do you simply learn from it and move on, determined to deal with it differently next time?

This isn’t a detox designed to make you the perfect person who eats only according to a plan. If you learn nothing about yourself in the process then that’s wasted time. I’d much rather you understand what happened over the weekend:  the emotional triggers, how you responded to them with food, how you then ended up feeling physically awful, emotionally guilty and then how you got yourself back on track. You decided to handle stress with food – that’s just ONE way of handling it, but you have a slew of other options up your sleeve next time when stress hits the fan. Now that you know those foods aren’t the solution, nor make you feel better, nor resolve anything for the better, next time you’ll think a bit harder about how to tackle personal issues. Perhaps you’ll reach for the phone to call a friend, or you’ll address it with that person right on rather than internalizing the anger and then stuffing it down with dinner?

Fast forward also and think about what you are going to do after the 21 days of Detox are over? Just because there won’t be any more daily emails to guide you, doesn’t mean you will give up all guidelines you’ve lived by for the past week. In 21 days you’ll have learned a lot about your emotions and your body and I’m pretty sure you’ll understand what difference it makes to eat clean. You’ll have developed an internal motivation to continue eating a certain way. You’ll know what foods you want to keep and which to keep at bay. You’ll know what foods you’re allergic to, which give you beautiful skin, great energy and help with your sleep and which have the opposite effect. Looking at the mirror you’ll see why you want to keep up with many of the great habits you’ve developed.

Life is always going to throw you challenges that you’ll have to tackle. In the end it is your response that determines whether you feel good in your skin or create disease. The choice will always be in your hands. This is a life-long effort you’ve started. It doesn’t end with the 21 days of Detox, nor does it end with the next cheat meal. It will never end as long as  you value your health, well-being and peace of mind.

Keep on moving on. There is no need to start over. Life goes on. Do know that there is no such thing as perfection. We don’t breathe perfectly clean air. We don’t drink perfectly pure water. We don’t get the perfect amount of sleep and we are surrounded by tons of toxins and pollution. And, we are not always living a life free from stress or triggers, so just do the best you can. Having foods that aren’t ideal isn’t going to be the end of your journey – unless you choose to create that rule. I know you have learned from this and you know what ultimately makes you feel your best. This isn’t the first and won’t be the last time either you’ll get off track. Anticipate it and come up with a plan to handle it and you’ll always feel in charge of your health and emotions.

Rock on and let’s chat Friday!