You are here: Home / Blog / Uncategorized / Food Diary Feedback: Getting back on track is easy if…

Every month I pick a few Slim & Strong participants and ask them to send me their daily food diary for a week. I usually pick the ones that have some extreme goals or the ones that struggle making a clean start. I also love those that just cannot figure out why they’re not losing fat even though they’re working their butt off. 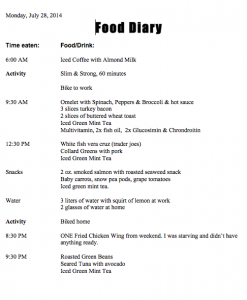 This month I had a woman return after several months off and she has easily put on about 20 pounds. In an effort to make herself feel better, she numbed her emotions by eating and drinking. It may have made her feel better in that very moment she consumed those meals, but when she stepped on the scale (not once, but twice for confirmation the scale wasn’t broken), she realized that she had lost touch with her body quite a while ago. So, naturally, given her shocked response and her desire to reverse the damage, I ensured she’d send me her food diaries. It usually takes only 3 days of consistently clean eating to feel better, become more focused, reduce the sugar and starch cravings and to get rid of the bloated feeling associated with an overabundance of sugar, starches and processed foods.

Here’s her food diary (click to enlarge) and a few pointers I gave her. I’m sure you can figure out that her success will depend upon a lot more than just exercise and diet, right? It will come down to how she learns to handle the emotions that make her eat and drink in the first place. Unless she doesn’t tackle them, long-term changes will only happen until the next emotional roller coaster starts its ride.

Hi L.,
love that you bike to work!
Thanks for sending the diary. awesome job! Now, a few things to consider to make it even more effective:
Protein: too much protein at any one meal is overkill. Even though protein doesn’t raise your blood sugar and insulin levels (and promote fat storage in turn), too many protein calories can still be stored away as fat. The only time you can afford to eat more protein than the average 20-25 grams average per meal is right after your workout. So, the omelette is great, but watch the turkey bacon as that can easily add up.
Carbs: Two slices of bread with butter are too much fat and too many carbs if added to the fat of the omelette (yes, eggs are great, but a yolk has about 5 grams of fat). skip the bread and butter and instead load up on more veggies. Two slices of bread have about 30g of carbs, which is ideal for one of your 5 meals, but you’re also eaten veggies here, so favor loads of veggies (much much more satiating) and skip the bread. The bread will make you retain water much longer than other carbs. Plus, grains can be irritating to your digestive tract.
Hydration: nice job on the water intake and hydration part.
Be ready and prepare: just because you have a type of food you no longer want in your diet in the fridge, doesn’t mean you need to get rid of it by eating it. There’s something called a trash can and that term should not apply to your body.  Make sure you set yourself up for success. An empty fridge is the opposite of success and leads to desperate moves.
it was a clean day and you had a great start. I know that in no time you’ll find your fit and happy self again. Remember, food can only make you happy for a few minutes, but in the long run it doesn’t carry that impact – i think you realize it has had quite the opposite impact on you, so go back to the basics. Self-care, self-respect and preparation. See you Friday!
Ariane
p.s. keep these diaries coming daily til Friday! 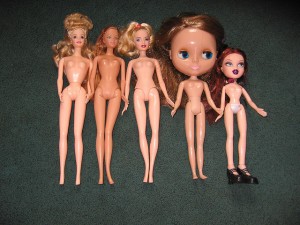 This might be the perfect time for you to ask yourself where your stumbling blocks are. Yes, clean eating and exercise will get you results, BUT, the real changes happen in your head and heart first. If you are truly happy and relaxed about your life, then you’re not going to look for outside remedies to fill the void. Some people eat (emotional eaters), some people shop, others use drugs or sex – we all have our mechanisms to cope with life, but if one takes overhand as a coping mechanism, you’re creating more issues. You may have heard that about the alcohol drinker, who still faces the same old issues when he/she sobers up, but the temporary numbing provided some seeming relief. In the end you not only face the same issues, but excess weight from the booze and the associated issues resulting from overuse.
How are you going to handle the uncomfortable things in life? By avoiding them or tackling them head-on?
Photo credit: ElephantJournal
0 replies

Detox Day 5: Done with Detox, but not done Updates from the Fitness World