You are here: Home / Blog / Uncategorized / Jumping Jacks at 9 months pregnant. How to boot camp with baby bump.

Fiona has been doing Slim & Strong since its inception in 2009. I remember the day she walked into one of my classes, wearing these mega-sized sweat pants. She was a woman with determination and she wasn’t holding back on the swear words in class either. Before I knew it, she had shed a decent amount of weight – more than 20 lbs, and she just kept coming back month after month. She went on to run races, then half marathons, marathons, spinning, always moving, always active and constantly determined to feel good in her skin.

Fast forward to last year. Fiona got pregnant and she wasn’t going to let the pregnancy stop her. After the initial surprise and a few sick mornings, she continued Slim & Strong while being 4 or 5 months pregnant. And, wouldn’t you know it, she kept coming to class until the day she gave birth. I was joking that morning that I should put a towel next to her, in case her water broke. Funnily enough, she went into labor later that day. She made the newbies look bad by doing jumping jacks with her 9 months pregnant belly like she had just stuffed a big pillow into her shirt. She is to this day a huge inspiration to all the other pregnant women in class, who at first fear continuing taking classes due to their intensity. So, I wanted to take the opportunity to give you some guidance on how to work out during pregnancy and how to get back into shape after delivery.

This is Fiona 9 months pregnant and 7 months after giving birth. 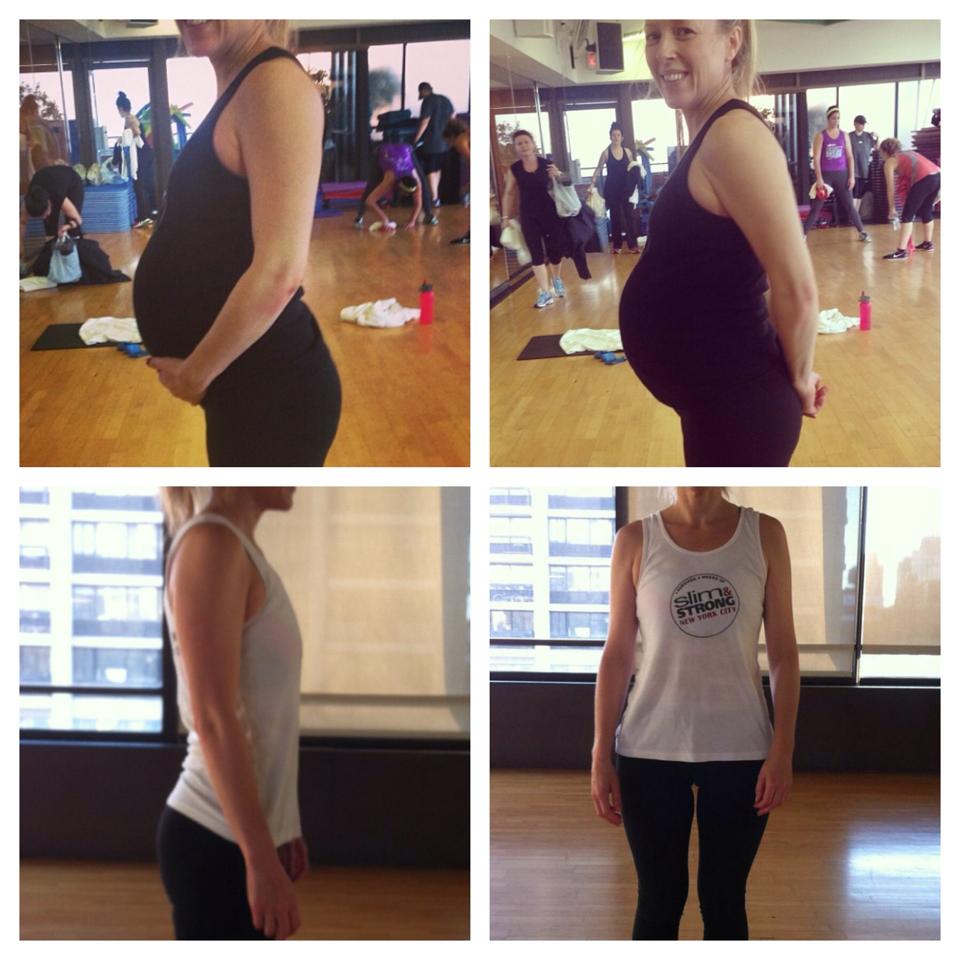 The general rules are:

Don’t START an intense program when you’re pregnant if you have been inactive before. However, if you have been working out before becoming pregnant and have been in decent shape, then it is actually recommended you continue exercising. If you do want to start an exercise program and have been inactive before, start with gentle exercises, such as Yoga, basic strength training and Pilates. Yes, you might be dealing with some morning sickness, low energy, blood sugar fluctuations and nausea in the first trimester, but once that’s subsided, you should take care of yourself as much as possible. Translate: consistent exercise that matches your energy level, a proper and balanced diet that feeds your body, the fetus, and your brain, and enough rest to recover. A pregnancy is tough on your body and it will require that you take care of your body and the life you carry inside. Listening to what your body needs goes above all else, so you will find that everyone has an opinion and guidance for you, but in the end you’ll know what’s right for you by tuning in and discussing issues with your doctor.

When you work out, make sure you stay properly hydrated and keep your body’s temperature under control. Stay close to the A/C and avoid exercising in the heat of the day. You will likely feel more exhausted, out of breath and sometimes have low energy, so honor those feelings and don’t push yourself beyond what feels good. Pregnancy is a time to be healthy and take care of yourself. It’s not a time to work towards physical accomplishments. You can do that after giving birth.

Make sure you monitor your heart rate. You want to be sure to get adequate oxygen flow into your body, so keep your heart rate under 140 or simply be sure not to get too out of breath.

I’ve had so many women in my classes who got pregnant over the years. They typically fall into two categories: There’s the type – usually first-time mothers – who get scared that the exercise will affect them negatively. They quit everything they did previously and become a bit anxious and worried for the first 3 months. Thank goodness, a lot of Ob/Gyns are adamant about their patients exercising to keep the blood sugar controlled, to keep their sanity, and to balance out their mood and energy, so most of these gals come back. Then there’s the type that recognizes the importance of exercise from the get-go. They speak to their doctor, get educated by speaking with other fit moms (I always make it a point to introduce people in class to others who have gone through the same experience so they can get guidance) and they make it a point to keep their bodies happy and fit throughout pregnancy.

Not only is working out during pregnancy good for your mood, for your baby’s health, but it also ensures you’ll get back into shape much faster after delivery. Those that let themselves go during pregnancy (for some it’s a great excuse to completely let go of any and all common sense…) have a much harder time to return to their happy self after delivery. Above all, listen to your body, discuss concerns with your physician, and be sure you do what makes you feel better.

Here’s the advice she shared with some other pregnant women. Thanks for sharing, Fiona!

“I only  got really bad nausea twice (Both times on the subway (it was summer and super hot). I would definitely recommend always taking water on the subway with you. I used to get waves of hot/cold sweats. The rest of the first trimester I just felt like I had a constant hangover without the headache. After then the worst thing I had was heart burn. That totally sucked but coconut water helped loads. Also I drank more water than normal as the months progressed as dehydration caused cramping. I normally hate drinking water but when  you know you are going to get super cramps if you don’t, it’s amazing how it suddenly becomes very appealing. I actually I had pretty bad cramping (like bad period pain) all the way through my pregnancy. I wondered if that was because my muscles were so strong  as I exercised so much prior to becoming pregnant. Since I had them consistently from start to finish the doc wasn’t concerned. She just said some people cramp a lot and you are one of them. But if they had suddenly come out of no-where it would have been reason to follow up.

Working out definitely helped though, although I was over cautious at first and stopped cold turkey for a few weeks until I saw the heartbeat at 6 weeks. (next time I won’t stop, I was just super paranoid). Then I checked with my doctor and he said I could carry on exercising as normal as long as I felt fine. So I got straight back into Slim and Strong and didn’t stop until I gave birth. My waters actually broke at work three hours after an S&S class (full term, four days early… so lucky it didn’t happen on the subway or in class ) !!! I was literally doing jumping jacks in class at 7am and was in hospital in labor by 11am !! I also  did soul cycle every week right up until the birth (however I wouldn’t recommend that unless you speak to the teacher first, mine knew I was pregnant and kept the room fairly cool for me).  For me the doctor said I could continue with what I was used to doing but not take on anything new. I exercised a LOT before I got pregnant and I continued running (albeit a lot shorter distances ) right up until I was 8 months, but after that it got too painful, so I stopped. At about six or seven months I did a 2-hour boot camp class on the bridge. I bought a special support belt to wear under my bump when I was running.  Slim and Strong worked fantastic for me. I was able to change some of the exercises as I got bigger. I only did side sit ups so as not to damage my stomach muscles and all back work I did on my knees instead of laying on my front. I also used to hold my bump sometimes when I was jumping up and down and I would often only do half the jumping jacks or switch them out for something else.  Overall I think the key is not to take on any exercise your body isnt used to doing and just listen to your body, If something hurts or doesn’t feel right stop.

My third trimester I was super tired, but it was only because the heart burn was so bad when I lay down at night I didn’t sleep well… however the pregnancy sleep deprivation  is absolutely nothing compared to when the baby arrives. So I think the lack of sleep in the third trimester is preparing your body to cope with things to come

I am so glad I worked out my whole pregnancy as I think it would have been a LOT harder to get back into exercise post-partum. I took a month off after the baby arrived (I stupidly tried to run after two weeks. Big mistake, it was impossible and too painful). But by four weeks I felt a lot better and slowly started S&S again minus the jumping. By 6 weeks the doc cleared me to do all the exercise I liked, she said jumping would be fine. She knew I had exercised all the way through my pregnancy so my body was already fairly conditioned.

Now the best bit was when I was in hospital and a doc was doing something down there (I was too drugged up to know exactly what ) and she had a trainee doc with her. She commented to the trainee “see this (pointing to something), she must be either a runner or a yogi with that muscle definition” ….. made my day … it’s the little things lol.

Oh and my baby, OMG he is soooo strong ! I’m sure it’s down to my exercise while pregnant!”