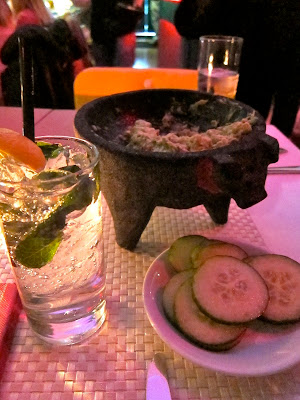 My friend Susan came to visit me this weekend from Ohio. I had warned her I was on Ariane’s 21-Day Detox Challenge and that I not only wouldn’t be able to get a drink with her, but I’d make for a very annoying dinner companion with the number of questions I’d have to ask whoever was serving us at a restaurant. And my choices would be very limited. I offered her a raincheck for another weekend but she decided to brave it.

I had also been worried about where we could possibly go for dinner – wondering if it were seriously possible to even eat out somewhere on this diet. I’ve eaten non-cheat meals at restaurants plenty of times before. But the no dairy thing and no grain thing is killing me – it eliminates all cheese (to me, the best part of a salad) AND stuff like brown rice and quinoa and cous-cous.

We were roaming around SoHo and decided to head to The Pan American, courtesy of Scout Mob. The restaurant is described on its website as “An American eatery seen through Latin eyes” and they’re big on locally sourced food. Turned out to be a great call! The food made me verrry happy. And I have never been to a place that’s so incredibly accommodating and tolerant of a million questions and substitution requests – all done so graciously by our waiter Joelle. I have to say, the service really made our night. The manager also came by to make sure all was going well. And was sympathetic to our detox plight. Considering we were already struggling with some sugar cravings, we were so grateful that these guys made it easy for us to achieve our goal that night. I wish more places were like this. The restaurant itself is very cool – kind of retro-looking in a more modern way (see below). 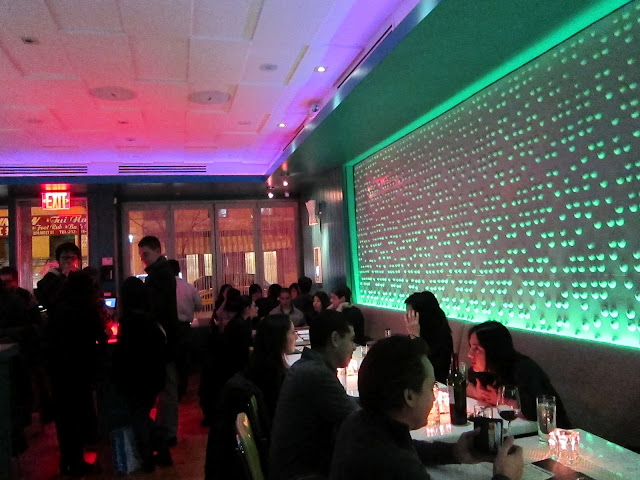 We started with their fresh-made ‘Tableside guacamole.’ I don’t remember the last time I had such creamy goodness (and if you’ve been following my 21-Day Detox Food Diary board on Pinterest, you’ll see I even had some guac just the previous day). I asked for it with cucumber slices instead of chips (thanks for the idea, Sara M!). No problem, unlike the previous night at Maz Mezcal on the Upper East Side that gave me way too much trouble for a plate of cucumber slices. As great as this tasted, I have to say, their chips smelled sooooo good. I will have to come back for them after this diet. 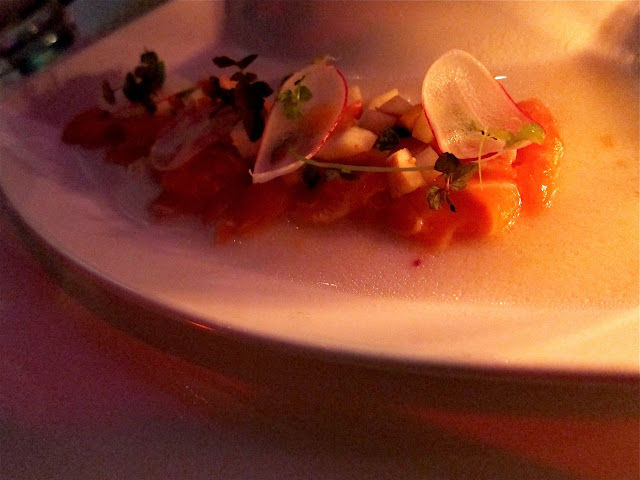 Next up, the ceviche. Saturday night featured salmon ceviche. Again, like butter. My husband actually wondered if this would be illegal for detox since ceviche is ‘cooked’ by fruit acid (we’re off fruit for detox week #1) but we shrugged that off. Good thing because it turned out to be more sushi-like anyway and melted in our mouths.

We also had the grilled octopus salad and asked to have the potatoes replaced with kale. The octopus was fresh and actually went really well with the kale. 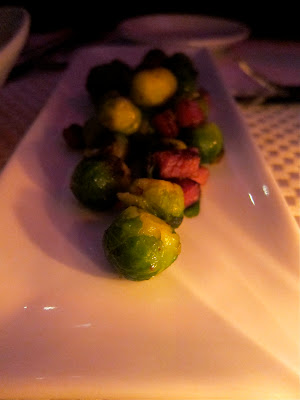 Roasted brussel sprouts with crispy fried shallots and tasso/vegan sausages was next up. We asked them to hold the shallots since it was fried, and since the sausages were made of soy (we’re off soy for week #1) we had the tasso with it. Yum. FYI, tasso is seasoned and smoked ham – I had to ask – and I’m guessing doesn’t exactly qualify as a lean protein, but there was very little of it – just enough to flavor the brussel sprouts and make our taste buds grateful.

We thought we’d be full by this point since we also had the steak tartare (which was probably the one thing I wasn’t crazy about – I like mine with bigger pieces of meat). But the plates are small – more tapas like – so we went for one more dish – the salmon filet, served with brown butter grits. At this point, I was too embarrassed to ask our waiter to substitute anything else so we just asked for it without the grits.

“What shall we replace that with?” he asked. Bless him. We opted for mushrooms. Look at that the gorgeous filet below. Perfectly cooked and so tasty. 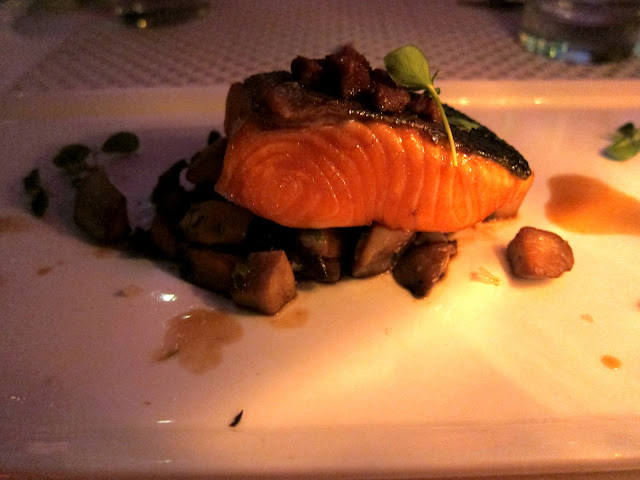 I couldn’t believe we had had an entire dinner out at a great restaurant and had not only eaten completely healthy (healthily?), but had no dairy or grains (or alcohol) to boot. Here’s Susan with dessert. I resisted it on Saturday but will most definitely be back for it. I can’t recommend this restaurant enough. 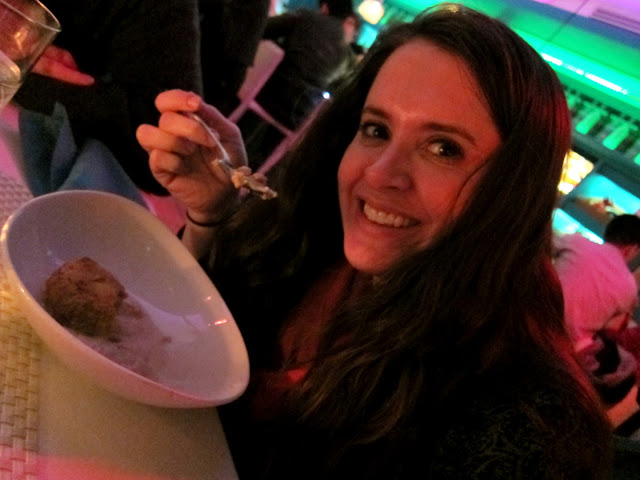 So here’s a mood catch-up:
Detox Day #2 (Friday) – Started out great. Really confident. Full of energy and confidence. Ended rather cranky. Irritable. Sick of unsweetened cappuccino. Really, really really wanted a glass of wine, especially since I was meeting my friend Punita after so long. Felt like we should celebrate. Resisted. I quite honestly struggled with the decision to not have a glass of wine for about 2 hours. Seriously. I wrote my blog post a dozen times in my head with the reasons I bungled detox on Day #2. Challenging day at work. Fell victim to my mood. Blah blah blah. Nothing sounded decent enough. I just didn’t want to have to write that. Or tell Ariane about it. And then there was Chrissy Normande who left a comment on my last post wishing me well and telling me she’d be following my blog posts about the detox. And that did it. Thanks Chrissy – no stronger motivation for a writer than someone who actually reads what she writes. You rock. No wine that night.

Detox Day #3 (Saturday) – Feeling better this morning. Had regular coffee with skim milk and no sugar for the first time. Had an omelette with lox for breakfast because I was sick of onions and peppers. Very happy with a great dinner at The Pan American. Slept well.

The Slim & Strong Detox Challenge is conducted by Ariane Hundt of my favorite Brooklyn Bridge Boot Camp. You can visit her site for more info. I should be bitching about it plenty over the next 3 weeks as well. 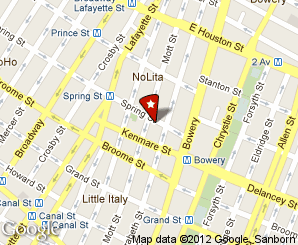